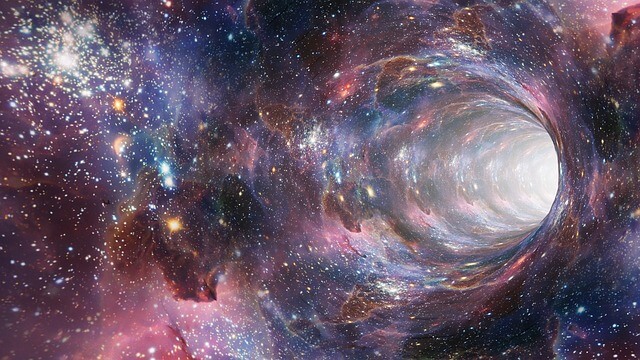 Are there other worlds we don’t know about in our universe?

Since ancient times, philosophers have thought about the existence of other worlds and discussed it.

Some philosophers such as Arthur Schopenhauer have explored panpsychism which is a view that consciousness, mind, or soul is a universal and primordial feature of all things. 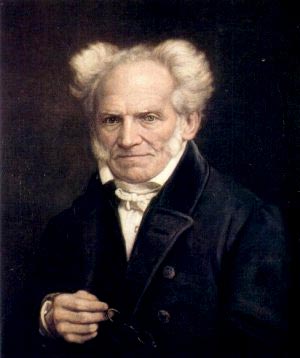 In the philosophy of mind, panpsychism is one possible solution to the so-called hard problem of consciousness.

David Chalmers has argued panpsychism is one of multiple viable theories of consciousness.

David Chalmers (1966-), an Australian philosopher who formulated the hard problem of consciousness.

On the other hand, in Japanese Shinto, it is believed that everything in nature is possessed by spirits, from trees and rocks, to rivers and mountains.

Regarding this view, Onisaburo Deguchi (1871-1948), the greatest psychic in Japan, explained the relation between the spirit world and the physical world in his writings, “The Story of the Spirit World.“

Everything in this physical world is a copy of the corresponding original element in the spirit world.

In other words, the physical world is a kind of image that reflects the spirit world as the true image.

This is the reason why the physical world has been called as “Utushiyo (the mirror world)” in Japanese Shinto.

Deguchi Onisaburo (1871-1948), the greatest psychic and philosopher in Japan.

He had an amazing clairvoyant ability to see the future and every spiritual entity in the universe.

Onisaburo left a voluminous amount of prophetic writings and most of his predictions came true.

The accuracy of Onisaburo’s prediction is more than 95%

Even today, Onisaburo’s predictions are coming true, such as Apple Watch, Multicoptor, Maglev and so on.

Also, Onisaburo was a great philosopher.

In the above model, each image on the monitor, such as Alice, a dog, an apple and stones has its corresponding data on the cloud database.

Similarly, in Shinto philosophy, it is considered that each element in the physical world has its corresponding spirit in the spirit world.

Here, some people may not accept the view that even dead matters such as stones have their own spirits.

However, even such people will have to admit the fact that in the above display model, each image on the monitor has its corresponding data on the cloud database.

In the display model, the image of stones on the monitor does not move voluntarily and thus it seems that the stones displayed on the monitor are devoid of intelligence.

Nevertheless, the image of stones actually has its corresponding data on the cloud database.

The same is true of the relation between the physical world and the spirit world.

The Multiverse Revealed by Shinto Philosophy 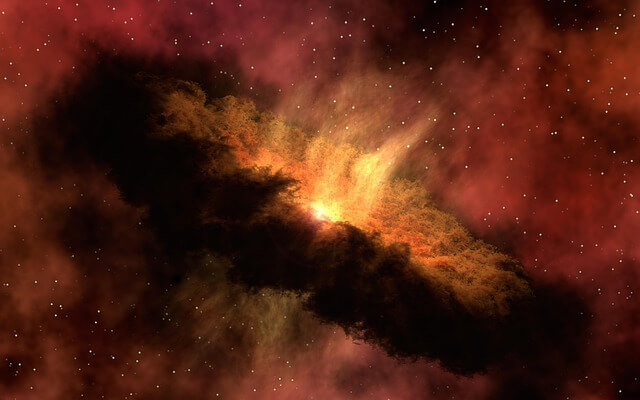 According to Shinto philosophy, each element in the physical world has its corresponding spirit in the spirit world.

However, the time and place of an element in the physical world are not always the same as those of the corresponding spirit in the spirit world.

For example, assume that the Alice’ body is in New York at 3 p.m. in the physical world, but Alice’s mind is thinking of arriving in California at 9 p.m..

In this case, even if Alice’s mind is thinking of arriving in California at 9 p.m., Alice’s body may arrive there at 12 p.m. after a delay of three hours due to various factors, such as an airline strike and a traffic jam.

This implies that, to specify the position where Alice’s mind and body exist, it would be appropriate to introduce a new coordinate (S) in addition to the conventional spatial coordinates (X, Y, Z) and time coordinate (T) (See Fig.1). 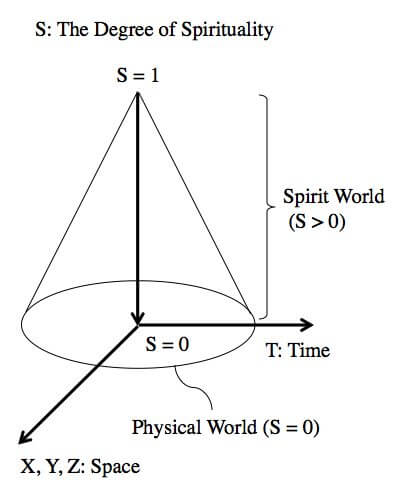 Here, we denote by “S” the degree of spirituality (or immateriality) of an element, where “S” can take a real number from 0 to 1 and as S approaches 1, the element is more immaterial.

By the way, according to Onisaburo, when an event occurred in the spirit world, the event is bound to occur in the physical world.

Mathematically describing this Onisaburo’s idea, it is considered that each element appears in the full spiritual state (S = 1) at first.

Fig.2 The Mathematical Model of ‘Mirror Law’ of Shinto Philosophy

Onisaburo called such a transfer from the full spiritual state (S = 1) to the full material state (S = 0) as “the law of copy and enlargement.”

This is the crucial point of “Mirror Law” of Shinto Philosophy.

The Solution to the Mind-Body Problem

Using this mathematical model, the flow of Alice’s mind discussed above can be explained as follows (See Fig. 3).

Fig.3 The diagram of the flow of Alice’s mind 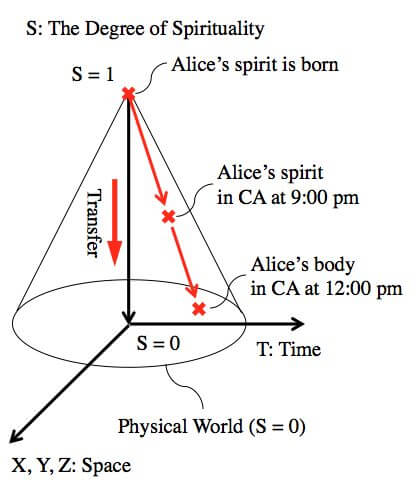 As shown in the above figure, Alice’s mind occurs in the full spiritual state (S = 1) at first and then the state transfers to the full material state (S = 0).

This transfer from the spiritual state to the material state can be compared to the flow of a river.

Here, assume that Alice is upper in a river and Bob is down in the river.

They are apart from each other and thus Alice and Bob cannot interact directly. 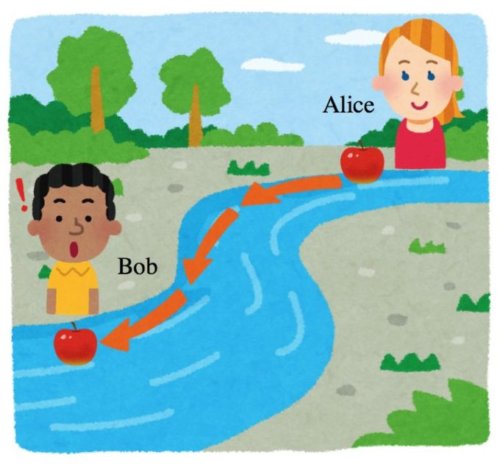 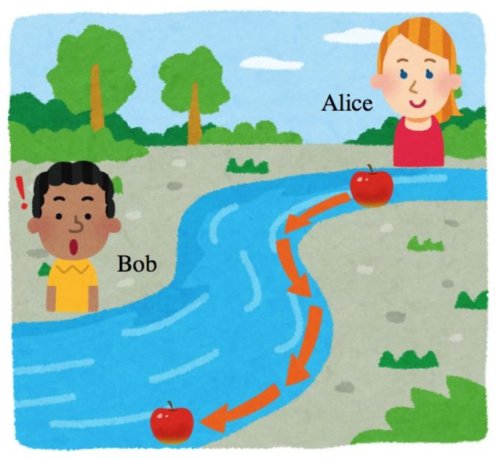 In this case, Alice and Bob do not interact directly with each other, but Alice can determine and control the position of an apple which Bob will see down in the river.

In other words, Alice can take advantage of the flow of the river to control the position of the apple down in the river without interacting directly with Bob.

Here, replace the upstream and downstream of the river with the mind and the body respectively.

Upstream of the river: The mind

Downstream of the river: The body

And then replace the position of an apple up and down in the river with workings of the mind and the body respectively.

Upstream position of the apple: Workings of the mind

Downstream position of the apple: Workings of the body

Given this perspective, you will easily understand how the mind can control the body without any interaction between them.

This is the solution to the mind-body problem according to Shinto philosophy.

The Relation with Wave Functions in Quantum Mechanics 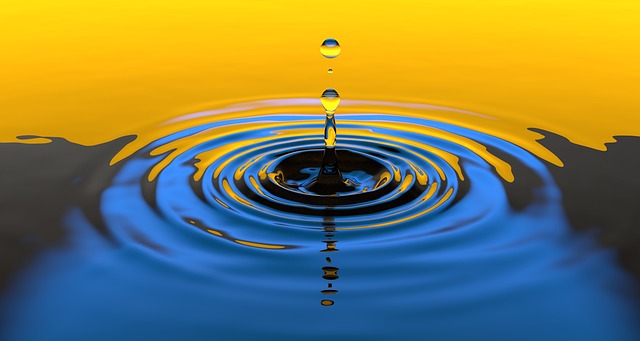 In the simplest case of the above mathematical model, the universe is composed of two kinds of worlds, that is, the spirit world (S = 1) and the physical world (S = 0).

This model consisting of the two-world system corresponds to the Cartesian dualism.

However, in Eastern philosophy, it is considered that there are a lot of worlds depending on the different degrees of immateriality.

For example, in Buddhism, it is considered that the number of the worlds is 3000, so the Buddhist often calls the universe as “Three Thousand Worlds.”

Considering this, we can also assume an intermediate state (0 < S < 1) which is neither the full spiritual state (S = 1) nor the full material state (S = 0).

A good example of such an intermediate state is a wave function Ψ in quantum mechanics (See Fig. 4).

Fig.4 The Relation with a wave function in quantum mechanics.

As shown in the above figure, there is a flow from the full spiritual state (S = 1) to the full material state (S = 0) and wave functions exist as intermediate states between S = 1 and S = 0.

Without the flow from S = 1 to S = 0, the intermediate stats will not transfer to the full material states (S = 0).

This is the explanation of the wave function collapse of the quantum mechanics according to Shinto Philosophy.

In Shinto Philosophy, it is considered that the body is the another aspect of the mind.

In other words, the mind and the body are just like two sides of a coin.

So, essentially, the mind and the body cannot interact with each other, because they are the different aspects of the same entity.

The Definition of the 5th Dimension in Shinto Philosophy

From the above discussion, it will be clear that our physical world is just a mere part of the vast universe which includes multiple worlds depending on the degree of the immateriality.

Interestingly, the introduction of the new coordinate (S) corresponds to the expansion of the conventional spatial and temporal dimensions (X, Y, Z, T) (See Fig. 5). 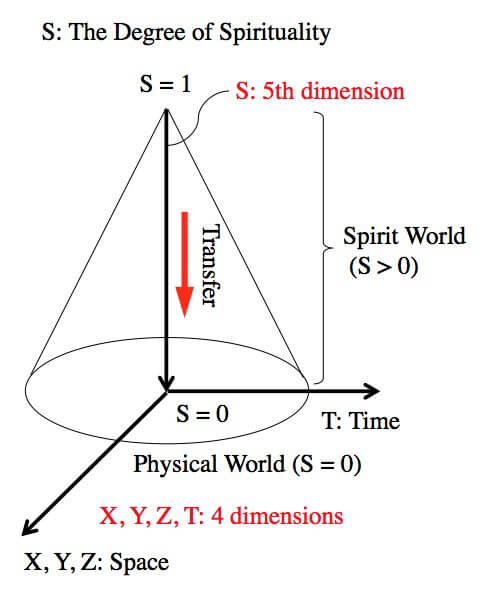 Therefore, in Shinto Philosophy, it is considered that there are at least 5 dimensions in the universe.

This is the greatest discovery of Onisaburo as a philosopher.

Furthermore, the flow of the 5th dimension is a crucial force for creating everything in the universe, because without it, wave functions will never collapse and nothing would exist in the physical world.

Amazingly, the above idea of the 5th dimension is also shown in Hitsuki Shinji, the final revelation of God.

Someday, the time may come when the secret of the 5th dimensional universe will be revealed.