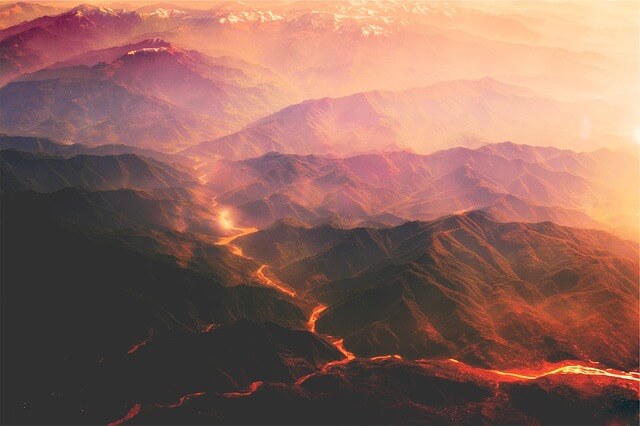 Here, I will introduce his amazing prediction of the earthquake.

The Prediction of Tokyo Great Earthquake

In the spring of 1923, Kiyosumi Kakei, one of the followers of Onisaburo, was reading a book Reikai Monogatari (The Stories of the Spirit World).

The Stories of the Spirit World was prophetic writings written by Onisaburo in 1922.

The following are the conversations between Onisaburo and Kakei.

I am reading your book, The Stories of the Spirit World.

An autograph manuscript of Reikai Monogatari (The Stories of Spiritual World) written by Onisaburo. 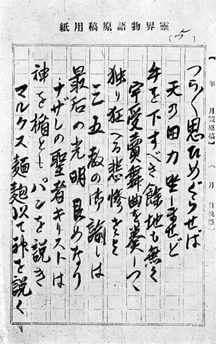 Oh, you are enthusiastic.

By the way, I think there may be a big earthquake in Tokyo in the near future.

What made you think so?

I see this long rain as an ominous sign of the earthquake.

You mentioned it in this book, The Stories of the Spirit World?

Please tell me where you mentioned it in this book.

I described the earthquake as ‘the explosion of ETONA’.

You know, I published a book before, saying,

‘Tokyo will be totally destroyed.’

But, that book was banned by the authorities.

So, in The Stories of the Spirit World, I described the earthquake in Tokyo as ‘the explosion of ETONA.’

The reason why is because by writing it in code language, this book would not banned, but anyone could easily understand what I really mean.

In this book, ‘ETO’ implies ‘Edo’ meaning the former name of Tokyo.

And ‘NA’ is an archaic word, meaning the ground, which was used in the Manyo (Nara) period of Japan.

So, ‘ETONA’ represents the ground in Tokyo.

I showed the big earthquake in Tokyo in the future by the words ‘The explosion of ETONA.’

So, when will the big earthquake in Tokyo come?

It will come in this autumn.

Tokyo will be a critical state in the beginning of this autumn.

By the way, please don’t tell anyone about this prediction.

Otherwise, you would give them (the authorities) an excuse for suppressing us again.

The Outbreak of the Great Kantō Earthquake 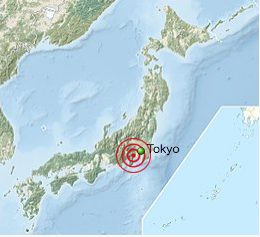 On September 1, 1923, a few months after the above conversations, the Great Kantō earthquake struck the Kantō Plain in Japan.

The earthquake had a magnitude of 7.9 on the moment magnitude scale, with its focus deep beneath Izu Ōshima Island in Sagami Bay.

This earthquake devastated Tokyo, the port city of Yokohama, and the surrounding prefectures of Chiba, Kanagawa, and Shizuoka, and caused widespread damage throughout the Kantō region.

Furthermore, the earthquake caused a huge fire, which burned and destroyed the greater part of the Tokyo city. 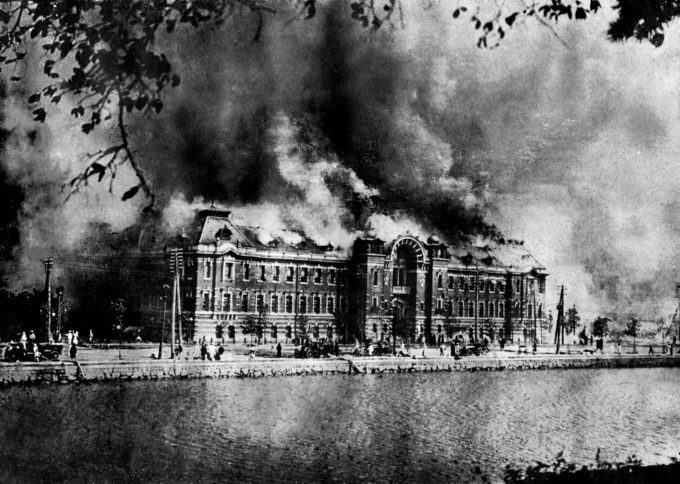 The fire clouds over Kantō, as seen from some distance away. 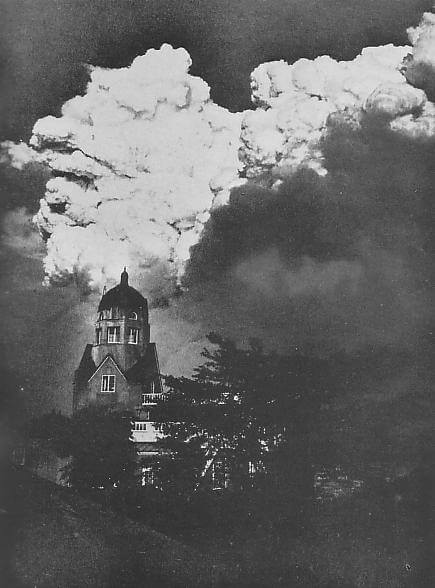 The fire clouds over Tokyo city.

According to Journal of Japan Association for Earthquake Engineering, Vol.4 (2004) No.4 P21-45, Moroi and Takemura, this earthquake caused unprecedented damage, with about 1,900,000 people affected, about 105,000 people dead or missing, about 109,000 houses completely destroyed, and about 212,000 houses burned down.

Japan’s first western-style skyscraper, Ryōunkaku before and after the Great Kantō earthquake. 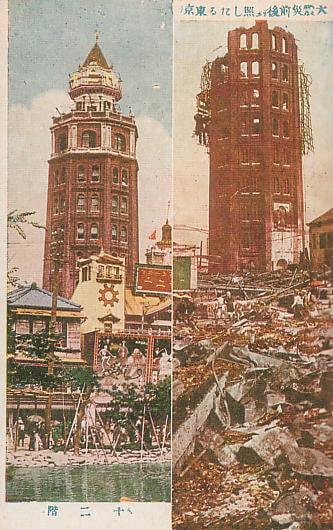 Desolation of Nihonbashi and Kanda seen from the Roof of Dai-ichi Sogo Building, Kyōbashi.

As a result, Tokyo city was totally destroyed by this earthquake.

In this way, Onisaburo’s prediction of the earthquake came true.

Reactions from the Media and People to the Onisaburo’s Prediction

By the way, Onisaburo warned Kakei not to talk about his earthquake prediction with anyone.

The reason why is because Onisaburo thought that his earthquake prediction would attract public attention and give the authorities an excuse for suppressing the spiritual movement by Onisaburo and his followers.

However, Onisaburo’s prediction became a hot topic among people soon after the earthquake, because his banned book saying

Tokyo will be totally destroyed.

had been widely known to Japanese people.

Some media even reported as follows:

When the earthquake struck the Kantō Plain, Onisaburo stayed in Kyushu.

On hearing the news of the earthquake, Onisaburo decided to return to Kyoto immediately.

When he got on the train from Kyushu to Kyoto, passengers gathered around him.

Then, they cheered enthusiastically for Onisaburo. 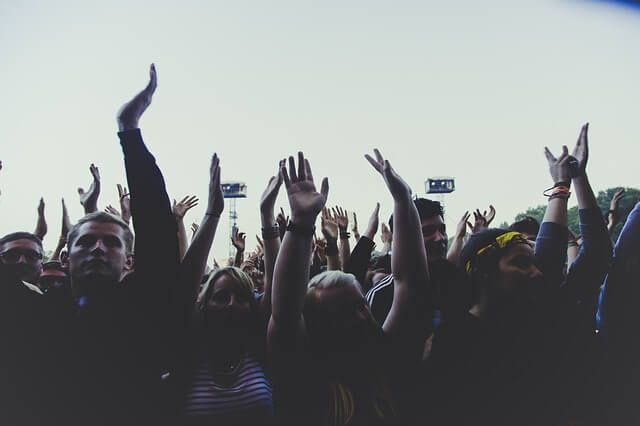 You are a wonderful psychic!

However, Onisaburo felt very ashamed of the excited people and looked at them with a grimace.

He thought that such an ill prediction shouldn’t have been realized, because many victims were suffering a wretched condition at that very moment.

Destruction of the area around Sensō-ji temple in Asakusa, Tokyo. 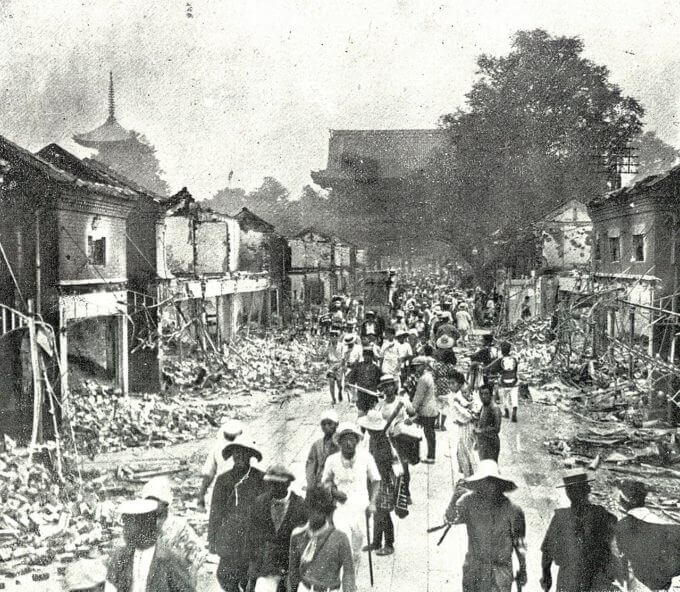 Earthquake victims sought refuge by a train from the NIppori Station to the local areas. 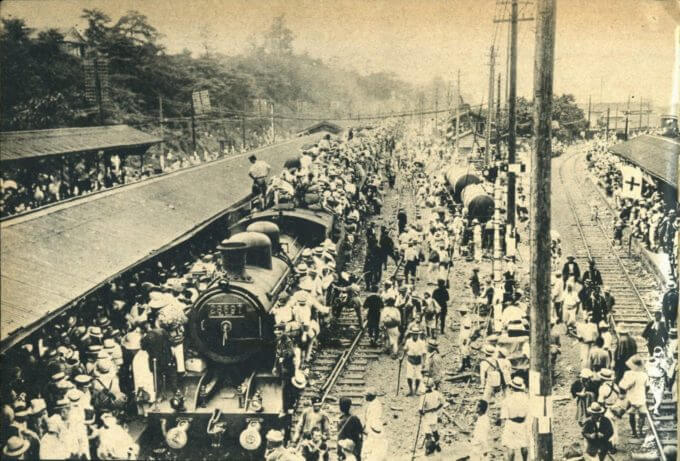 Ironically, when he predicted the future, people called Onisaburo a liar.

However, now that his prediction came true, they cheered him loudly.

Therefore, Onisaburo ordered his followers not to spread his prediction of the earthquake disaster and to devote themselves to the relief operation of the victims of the disaster.

In this way, Onisaburo was really a great psychic!