Japanese Psychic Predicted the Outbreak of World War I 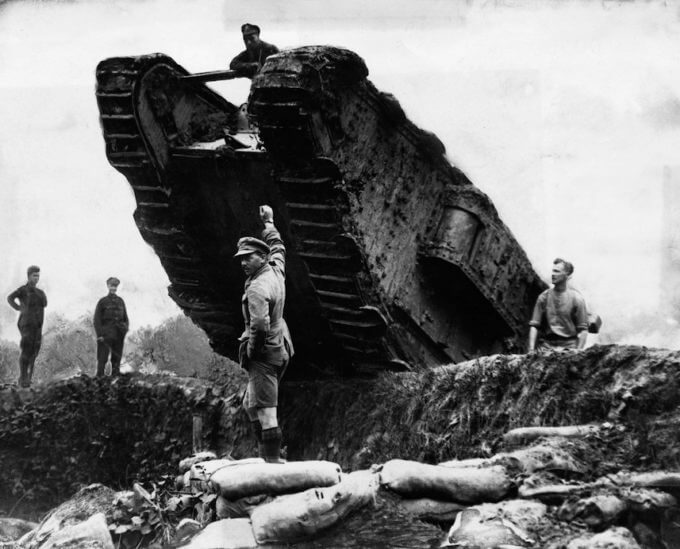 This is a true story of a man who had an amazing ability to foretell the future.

Onisaburo was born in Anao, Kameoka-city, Kyoto, Japan in 1871.

His grandmother, Uno Ueda was a sister of Kodo Nakamura, a famous Japanese scholar of mystical powers dwell in words (Kotodama).

Onisaburo was called a wonder boy in Anao village, because he was a child prodigy.

Actually, when he was 13 years old, Onisaburo taught children in elementary school as a substitute teacher.

He even pointed out the mistake of a school teacher.

Furthermore, he also had an amazing psychic powers since he was a child.

Thus, Onisaburo became a spiritual leader of Oomoto religious movement that had a great influence on the Japanese spiritual culture in the early 1900s.

Onisaburo had a great ability to foretell the future and thus he left a voluminous amount of prophetic writings.

Onisaburo foresaw a lot of future events with his extraordinary spiritual power of prophecy.

Here, I will introduce some of his amazing predictions.

The Outbreak of World War I

In May 1914, Onisaburo made the following prediction.

A great war will break out soon.

On June 28, 1914, a month after the above prediction, Austrian Archduke Franz Ferdinand and his wife were killed in the Sarajevo, the capital of the Austro-Hungarian province of Bosnia and Herzegovina.

They were killed by a group of assassins organized and armed by the Serbian Black Hand. 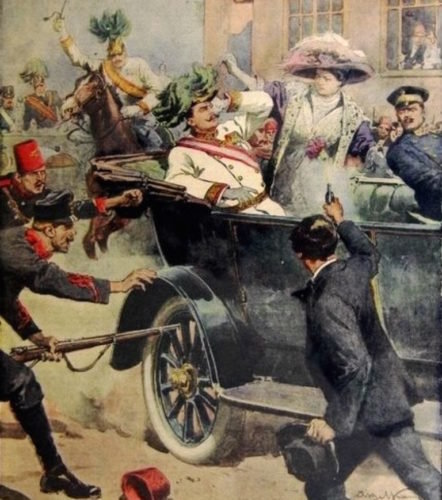 This assassination triggered World War I.

Within weeks, the Great Powers of the world including Russian Empire, French Third Republic, the United Kingdom of Great Britain and Ireland, Germany and Austria-Hungary were at war, and the conflict soon spread around the world.

Thomashwang at the English language Wikipedia

Canadian troops advancing with a British Mark II tank at the Battle of Vimy Ridge, 1917. 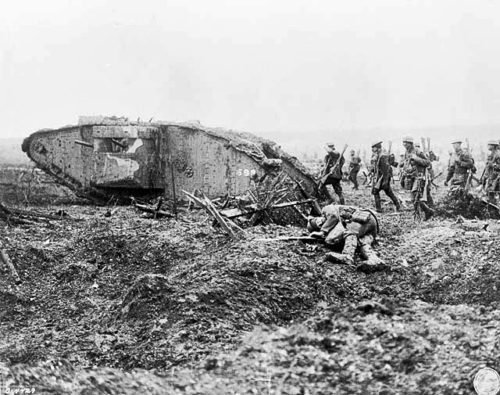 In this way, the Great War broke out and Onisaburo’s prediction came true.

The Abdication of German Emperor

Furthermore, in November 1917, Onisaburo made a prediction about the end of WWI in his prophetic poems “Iroha uta.”

Kaiser will fade away in despair by the finishing blow of America.

He will end in vain.

In September 26, 1918, ten months after the above prediction, the Allied launched the final assault on the Hindenburg Line with the Meuse-Argonne Offensive.

The Meuse-Argonne Offensive was the America’s largest military campaign with 1.2 million Soldiers and Marines participating in it, which brought the war to an end.

U.S. Marines advancing in the Argonne forest during the Meuse-Argonne Campaign. 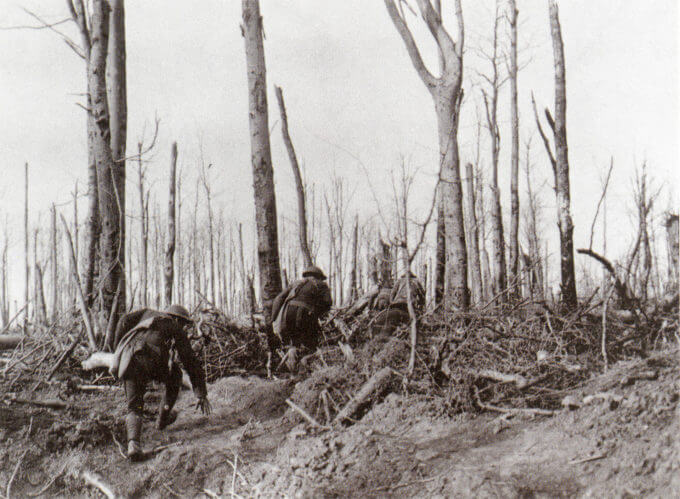 Then, in October 1918, a mutiny of sailors  triggered the uprising in German.

The uprising spread quickly to the entire German Empire and caused the German Revolution.

Soldiers stand behind a barricade during the 1919 uprising. 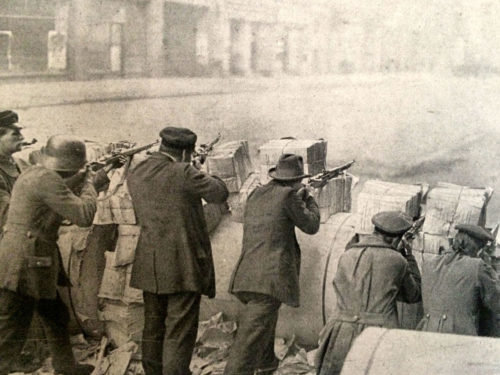 On November 28, 1918, Kaiser Wilhelm II abdicated his throne and fled Germany and went into exile in the Netherlands.

Wilhelm II lost the support of the army and he abdicated in November 1918 and flied to exile in the Netherlands. 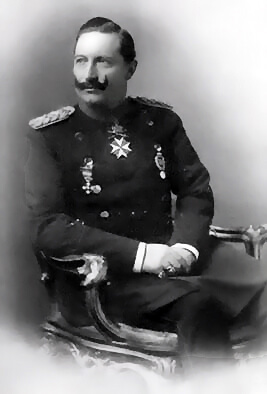 This was the end of the House of Hohenzollern’s 400-year rule.

In the end of WWI, Kaiser faded away in despair, just as Onisaburo predicted.

The End of World War I

Onisaburo also made a prediction of the total length of the WWI.

He wrote the following prediction in “Omoto Sinka” in published in December, 1917.

Comparing to a play, the First Sino-Japanese War corresponds to the first stage,


the Russo-Japanese War corresponds to the second stage, and


the third stage corresponds to this World War (WWI), which will last until the fifth year.


The main stage on which a dragon and a tiger fight each other will start from the year of Tsuchinoe Uma.

The above prediction indicated that the World War I would last until the fifth year, that is, the WWI would end in 1918.

Amazingly, as Onisaburo predicted, the WWI ended on November 11, 1918.

Furthermore, it is remarkable thing that Onisaburo also foresaw in the above prediction that  the next Great War after WWI would break out.

Therefore, Onisaburo predicted that the main stage where the Allied powers and the Axis powers fight each other would start from 1919.

In 1919, the Versailles Peace Conference was held and the creation of the League of Nations was decided.

In 1919, the Versailles Peace Conference was held and its principal mission was to maintain world peace.

However, in the same year, a man joined the German Workers’ Party (DAP), one of the political parties in Germany.

Then, in July 1919, he was appointed intelligence agent of a reconnaissance commando of the Reichswehr, both to influence other soldiers and to infiltrate the DAP.

It was the first entry to politics for this ambitious man.

His name is Adolf Hitler. 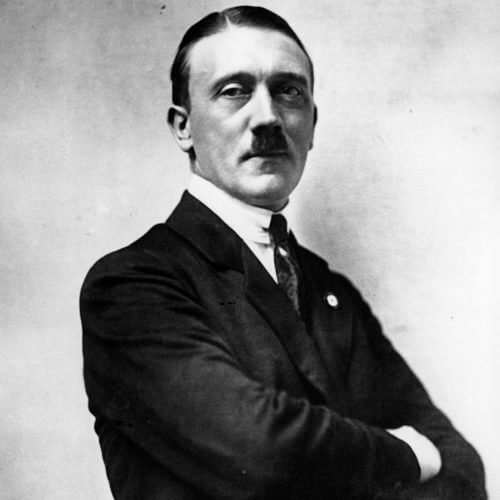 At that time, Hitler embarked on the next global war, that is, the World War II.

German troops marching through occupied Warsaw in 1939. This was the beginning of the next global war, WWII. 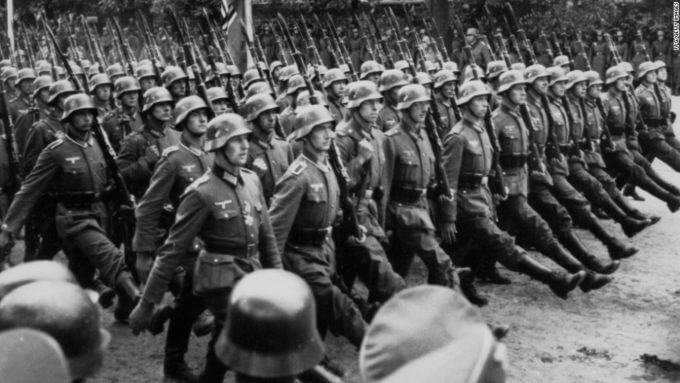 The main stage started in 1919, as Onisaburo predicted.

あわせて読みたい
100 Years Ago, a Japanese Psychic Predicted the Defeat of the Empire of Japan (Part 1) On December 9, 1941, the Empire of Japan made a surprise air strike on Pearl Harbor.   By this surprise attack, eight American battleships became out of...
English Japanese Spirituality Onisaburo Deguchi Prophecy
Let's share this post!